Body positivity can be defined as a social movement to present the human body in a positive light. The movement advocates the acceptance of all bodies and it initially started in order to empower overweight women and men who may face insecurities in the modern world. The body positivity movement was a way to increase representation in the media and reduce an emphasis on physical appearance to appreciate the functionality of the human body.

This movement has been celebrated by many but it has also been heavily criticized due the approach that is taken. The term curvy defines the differential between the size of the waist and hips but the term has been widely used to represent plus size models. Terms such as fatphobia are becoming ever so popular and can be defined as the fear or hatred towards fat bodies. Thin privilege has also been a popular term to make thin people understand the struggles of overweight individuals and try to be more understanding regarding the matter.

Thin privilege is the ability to go on with everyday tasks and not be fat shamed. The ability to have a burger without being condemned and also the simplicity to find clothes which are often times taken as a form of ‘privilege’. The word privilege as defined from Oxford Languages means a special right, advantage, or immunity granted or available only to a particular person or group. This word has been attached to many new social movements in an attempt to prove the superiority of a certain group over marginalized individuals.

Body positivity is seen as a way to normalize overweight or obese individuals and attempts to tackle the social difficulties these groups of individuals encounter. The common arguments are that thin people find it easier to lead their day to day lives as they do not face issues related to attractiveness, clothing, comfortability and representation in the media. The thin body is seen to be ideal whereas the term ‘fat’ will most probably become a slur in the years to come.

Is the Narrative Flawed?

We are somewhat living in an alt reality where being overweight has become admirable and obesity is merely a hoax. The body positivity movement was initiated and celebrated to prevent people from going after Barbie-like proportions by implementing diet pills and unrealistic beauty standards. The movement helped battle against eating disorders such anorexia nervosa, bulimia nervosa and orthorexia but now the movement has strayed away from science and decided to embrace a feel good mindset.

The body positivity movement has managed to blur the term obese and replace it with plus size. The fashion industry has chosen to embrace plus-size models to meet public demand. In a study by Dr. Raya Muttarak, from the University of East Anglia (UEA) and the International Institute for Applied Systems Analysis (IIASA), it is found that the normalization of ‘plus-size’ body shapes are leading to increasing numbers of individuals underestimating their own weight by embracing the extra pounds rather than tackling the issue of obesity which is steadily increasing in many countries.

Plus sized models such as Tess Holliday has consciously chosen to celebrate an unhealthy figure and parade the body positivity movement for the masses. The narrative is much like choosing an alcoholic to be the poster for liquor merely to be inclusive. There is no longer a distinction between what should be celebrated and what should be altered rather everyone gets a participation trophy for existing and no change should be made on the individuals part. Celebrating differences has also been welcomed and appreciated but celebrating something that can potentially cause harm/ death seems extremely foolish and short sighted.

The body positivity movement is closely tied to the fat acceptance movement which originated in the late 1960s and fat activists argued that modern culture’s focus on weight loss does not have a foundation in scientific research. Thus fat activists argue that health issues such as obesity and being overweight have been exaggerated or misrepresented as a means to cover up aesthetical prejudices. The body positivity movement has still not managed to crack the consensus within the scientific community as the notion still stands that obesity does harm the health of an individual.

Self declared woke brands have decided to jump on the bandwagon when it comes to the body positivity movement as they try to embrace individuals of all sizes in ad campaigns. The promotion of an unhealthy figure is done by million dollar companies to be seen as more inclusive by breaking barriers and common stereotypes. However in most cases these companies are faced with criticism and backlash from the medical community as it is seen as irresponsible advertising. These images reach millions and often times can effect the minds of impressionable teens who may view an unhealthy lifestyle in a less serious manner.

Go out there and slay the day 💪🏼 📸 Glitter + Lazers pic.twitter.com/cIc0R3JfpR

The effect of the ad may have been to spread body positivity by encouraging people to love themselves but the ad was poorly presented and it came of as a means to normalize obesity. Those who have opposing views to what is commercialized are labeled as individuals who support fat shaming but the reality is those ads are promoting an unhealthy body image. Experts argue that it may be compassionate to stray individuals from such a lifestyle and promote a healthy body image rather than lamenting hurtful facts for the sake of monetary gain.

Celebrating the extremes has been the marketing strategy for many brands but some are taking a more mindful approach by incorporating plus size models who are physically healthy but may stray away from the generic hourglass look. Those approaches set realistic standards and diminishes the glorification of a clearly unhealthy body image that will ultimately lead to medical issues in the future. The body positivity movement has been the perfect tool for brands to get a reaction from individuals who are on both sides of the coin when it comes to the issue.

More brands are adopting the idea of diversity for the sake of capitalism without thinking through most decisions on a rational level. These ad campaigns may make people feel better about themselves and drive individuals away from a healthier lifestyle and decreases the promotion of exercise or healthy eating. Masking health concerns in the name of breaking the stigma in regards to fatphobia is disingenuous and the “plus-size” market is continuously expanding to include lifestyle and home products aimed at simplifying life for those considered obese.

Body positivity has become synonymous with obesity acceptance and this form of acceptance has undermined decades worth of progress made towards reducing cardiovascular disease (CVD), diabetes, heart attack, stroke, hypertension, etc. The term fatphobia may be the fear of fat bodies but it is also tied to the fear of medical diseases that are associated with such body types. Positive body image is an integral part of a healthy lifestyle but trivializing obesity has the same effects as trivializing alcoholism and drug abuse.

Based on the WHO, more than 1.9 billion adults aged 18 years and older were overweight in 2016 and the worldwide prevalence of obesity nearly tripled between 1975 and 2016. Over 340 million children and adolescents aged 5-19 were overweight or obese in 2016 and the numbers have increased drastically with an estimated 900 million people who suffer from obesity in 2019. 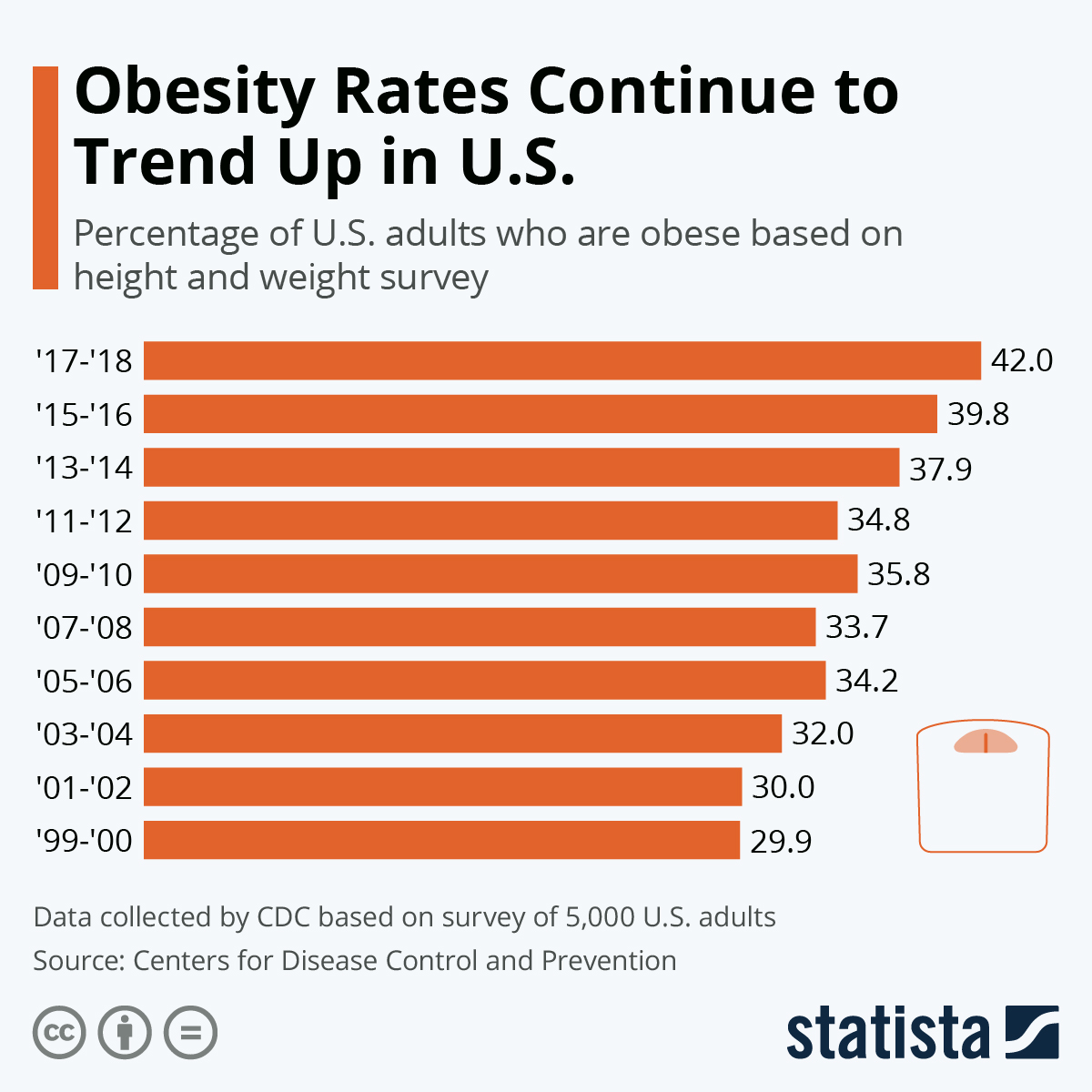 You will find more infographics at Statista

More habitual promotions of unhealthy body images through the body positivity movement will further contribute to higher prevalence of obesity especially among those of lower income and education. The National Association to Advance Fat Acceptance (NAAFA) is a fat-rights organization established in 1969 which protests the lack of fat acceptance in society and improve the quality of life for fat people. Such organizations embrace an unhealthy body image due to the popular majority and challenge the status quo in regards to health concerns.

Taking It Too Far

The body positivity movement may have gone too far and the motives of the movement have surely changed over the years to the point where thin privilege exists. This form of victimization by surrounding a theme with prejudice as a means of gaining sympathy takes away from the integrity of the movement. Pop culture may continue to embrace this movement but the harmful effects of it will not change and if anything, this is merely opening up more doors to be inclusive of even more harmful themes. The normalization of obesity is proof that soon even diabetes may just be the next big trend.

The thin are in no way privileged as extreme body shapes are a choice and those who truly want to embrace body positivity should look for better role models that fit the bill in order to lead a healthier lifestyle. Individuals with average body sizes on billboards were never harmful in any way so why take such a drastic approach by promoting overweight individuals in the name of body positivity? We have established ourselves as a lazy society that is so incompetent to the point where we would rather embrace an unhealthy physique than work towards a better body image.

This notion of living without consequences was originally embraced by hedonists and now we have returned back to this mindless way of life. Body positivity may just be an excuse for the 21st century to normalize and capitalize off yet another human mistake or tragedy. Science has already set the standards when it comes to a healthy body image and it’s best if social culture didn’t interfere for the sake of being woke. Another movement for the sake of normalizing unhealthy practices will only lead to the corruption of young minds that will forever be void of rhyme or reason.

Trapped in The Apple Ecosystem

The Evolution of Recreational Drug Culture

Outgrowing Boy Psychology and The Journey Into Manhood

Hariiharahn
I am a public speaker as well as debater who enjoys challenging the status quo for a multitude of topics . I write articles that approach social issues in an unconventional manner, stimulating more profound discussions along the way.